When I worked in drinks marketing and we brainstormed names for new brands there came a crucial point in the analysis stage when we asked ourselves: "Is it a good bar call?".  What we meant was: would people be comfortable calling it out at a bar?; would they be able to pronounce it?; and was it memorable enough to stick in the mind until you were next at a bar? The classic example of a bad bar call at that time was Bleu de Brasserie, an attempt by Allied Breweries to make lager appeal to women.  The name failed in every respect and and if the brand was ever discussed it was invariably referred to as 'The Blue Bra'. 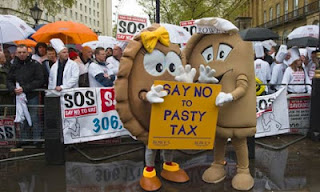 One of the reasons the government has had to backtrack on its budget plans is that some seemingly small and inconsequential moves simply work too well as a 'bar call'.  Attempts to tidy up some anomalies in VAT charges and pension allowances were all too easily dubbed 'Pasty Tax' and 'Granny Tax' by those not in agreement with the bigger picture.  And once you have the sort of snappy phrase that makes a good bar call it conjures up all kinds of imagery and comic potential.  Above all, it's a gift to columnists and headline writers.  Having initially suggested that David Cameron would never be able to return to his favourite holiday spot in the West Country, the Sun has now heralded the climb down with 'PASTY LA VISTA TAXMAN'. 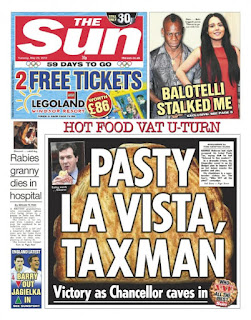 So, when you are planning any sort of policy or announcement, think beyond the plain facts - pasties, pensioners and fixed caravans were minor issues that were never going to raise any significant revenue - and look at it from the headline writer's perspective.  Above all, is it a good bar call?
Posted by Nick Fitzherbert at 10:23