Clarkson gave business presenters a valuable lesson in editing. Now he needs to relearn the art of ‘Killing your Darlings’

So The Grand Tour, Clarkson, Hammond & May’s new post-Top Gear show, has finally hit our screens, albeit via an Amazon Firestick, and the ‘Terrible Trio’ have many reasons to be rather pleased with themselves. The bits in the tent need tightening up and they should make better use of their chosen location, but the films are magnificent – with one little quibble that harks back to a lesson for business presenters. 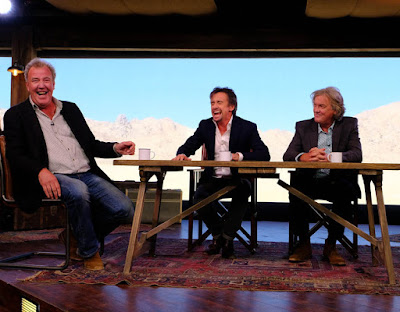 In my Presentation Skills sessions the subject of editing tends to loom large, especially when I am helping start ups with their investor pitches. I explain to the presenters that they simply know ‘too much’ about their topic. They have been fully immersed in that topic for months, if not years, so understandably want their audience to hear the full story, complete with all the intricacies on which they have laboured so long. The trouble is that the audience will be hearing it for the first time and have yet to develop any interest at all; at this stage they probably need a version that has been highly simplified. Really it needs an outsider (someone like me!) to look at the situation in an objective manner. Only then can you overcome what the psychologists call the ‘Curse of Knowledge’ – knowing too much to be able to explain something to people hearing it for the first time!

One of the techniques I recommend as a cure for this curse is to adopt the film makers’ approach to editing which is so ruthless that they call it ‘Killing your Darlings’. They go to all the trouble to writing dialogue, acting it out and filming it, only for much of the resulting footage to end up on the cutting room floor. The need to fill very specific time allocations and to hit commercial breaks at pivotal moments is part of what drives this approach, but it is more nuanced than that. If you watch the deleted scenes on DVDs the director’s voice over will typically include comments such as: “Nice performances from both the lead players here, but it wasn’t moving the story forward. So it had to go.”

Among the best recent endorsements for this ruthless approach to editing happens to be one from Jeremy Clarkson. In a Sunday Times column just after his famous fracas he said: “…every week the films were edited to a length that felt right. They felt balanced. They felt good. But every week there simply wasn’t time to fit them into the programme – so they’d have to be shortened. And without exception they were better as a result.”

My ‘little quibble’ with The Grand Tour is that, while the films were both beautiful and embraced all that was best about the old Top Gear, they were a little too long. Early reviews seem to agree – The Evening Standard said: ‘segments testing hybrid hyper-cars drag at times’. In The Times, meanwhile: ‘the first sequence is too long…..For a show about speed, this played very slowly to me’.

What seems to have happened is that they have broken free from constraints but, as Clarkson himself said last year, one of those constraints – having to fit into precisely 58 minutes - had actually being doing them a favour. When broadcasting on the internet no one is putting up a stop sign and you can all-too-easily just keep wandering on.

So Clarkson and producer Andy Wilman need to re-learn the discipline of Killing your Darlings, possibly by doing as I advise business presenters – getting help from a third party who has had nothing to do with the content and so nothing to lose from making a few cuts. Furthermore, they will be seeing it for the first time, so will react much more like the audience will on the big day.
Posted by Nick Fitzherbert at 08:01