Last night I finally got to meet one of my communication heroes – the legendary ad man Dave Trott, who was speaking at the LSE on his favourite topic ‘Predatory Thinking’.


As a keen disciple of Trott’s books and blogs I was looking forward to hearing lots of familiar stories – straight from the horse’s mouth.  What intrigued me as a Presentation Skills coach, however, was whether be could be as compelling in front of a live audience as he is in print and through various advertising media. And what would he use in the way of presentation aids?

The answer to the first question is that Dave Trott educated, inspired and charmed every one of the 500 or so people who had come to hear him and he stayed very late into the evening signing books and engaging personally with every purchaser. As for his presentation aids, he announced: “We’re going old school” and proceeded to scrawl a series of little doodles on an overhead projector!  Admittedly it was probably actually a ‘visualiser’, but it was about as far from PowerPoint as you can get. And it worked perfectly in terms of amplifying the topics he was communicating.

Now, in my book Presentation Magic I referred to a discussion with a friend many years ago when we theorized about what would make the perfect presentation tool. After much debate we decided on the flipchart because you could appear to be making up the content as you went, enabling you to tailor your content directly to feedback you were receiving from your audience, so making them feel they are truly a part of all that is being discussed. Of course, nobody actually does this because flipcharts are old tech and I have even see text books that say ‘flipcharts have no role in presentation’. Here, however, Dave Trott was putting the principle into action, albeit with a tool that can reach an audience in excess of 500. 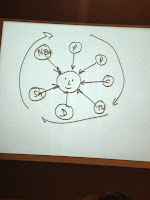 You can see some of Trott’s doodles here. What would your marketing department make of those? Believe me, though, they were perfect as a tool for supporting the speaker on this occasion.  And that is how we must perceive presentation aids of all types – as a tool to help you as a speaker to get your point across.  I often show the people I am coaching videos of Steve Jobs and I point to the way he never puts anything on the screen unless it is actively helping him at that moment. Dave Trott takes the principle several stages further by bringing real personalisation to the process. 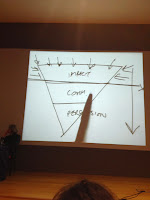 While we are on the subject of Dave Trott, I urge you to read his book Predatory Thinking. Essentially, it is Trott’s take on the concept of ‘Disruptive Activity’ that has become the by-word for securing an advantage and getting ahead. His favourite story of a ‘powerful strategy to out-think the competition’ goes like this:

Two explorers are walking through the jungle. Suddenly they hear a tiger roar. One explorer sits down and takes a pair of running shoes out of his backpack. ‘You’re crazy, you’ll never out-run a tiger,’ says the other explorer. ‘I don’t have to out-run the tiger,’ he replies. ‘I just have to out-run you.’

The pages of Predatory Thinking are full of stories like that, with Trott telling them straight from the heart is his own distinctive style – very much as he speaks. I describe it as ‘street wisdom’ because it’s all about people and, woven in amongst classic examples such as Churchill, Einstein and Jobs you find actors, guitarists, racing drivers, football coaches and people as diverse as Vietcong soldiers and a plumber.

Predatory Thinking – and its predecessor Creative Mischief – give you the distilled wisdom of a lifetime and it’s too good to be confined simply to the creative community that usually follow Dave Trott. You will find yourself choosing your favourite stories, telling them at your next meeting and wanting more. And the brilliant thing is that you can feed the habit because these books are essentially compilations of Dave Trott’s regular blogposts.  Which means you can find more on a regular basis at these sites:

Predatory Thinking can be found in print and on Kindle by clicking on the book:
Posted by Nick Fitzherbert at 10:29