Breaking Bad news for business presenters – DVD extras are on the way out, together with invaluable editing tips

As I brace myself for the culmination of Breaking Bad and reflect on how much I enjoyed Kevin Spacey’s House of Cards recently, I realise that there really is a lot of good stuff on television these days. Except, of course, I didn’t actually watch either of those series on TV; I didn’t even watch them on DVDs; I watched them via the internet!

Hugh Laurie has been saying this week that the days of big network TV series are over and there are clearly major implications for the whole of the entertainment industry and beyond. I, however, want to focus on one tiny element in the midst of all this change and mourn the inevitable passing of ‘DVD Extras’. Why? Because, hidden among those DVD Extras, you will often find some very useful lessons for anyone giving a business presentation.

Imagine you have just constructed a business presentation. You have carefully crafted the structure and honed your words, pretty close to what seems like perfection. To make your presentation really effective, however, you are now going to have to throw some of it – maybe even much of it – into the bin!

For true clarity we need to eliminate anything that doesn’t actively help to make the point. Magicians are acutely aware of this principle. They live by the maxim ‘if it doesn’t add, it detracts’, so they are ruthless in editing down their performance to the bare essentials. 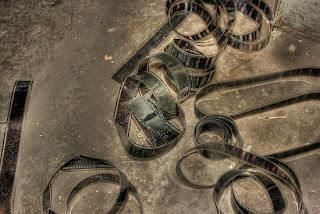 This is difficult – agonising even – because the content that needs throwing away may be very personal to you as well as carefully crafted. Little wonder then that film makers refer to the process as ‘killing your darlings’; they go to all the trouble of writing dialogue, creating a set, performing and filming, only for large chunks of their precious creation to end up on the cutting room floor! It is useful and educational, therefore, to watch the ‘Deleted Scenes’ sections that you find within the extras on DVD versions of films and TV shows; the latter have a particular pertinence as they require the content to fit very specific time allocations and include numerous breaks for advertising. Switch on the director’s commentary for these deleted scenes and you will hear comments such as: “this is a beautiful piece of dialogue, nicely acted by both the lead players, but it wasn’t really moving the story forward, so it had to go”.  One that I saw recently had the director saying: “this scene cost me a fortune; I had 350 extras coming over a hill, all being captured by a camera crew in a helicopter. But once I was in the edit suite I realised it was slowing everything down”.

So, if you ever find yourself in any doubt about the inclusion of a specific element of your content, consider: ‘Is it really moving the story forward’?  Might it even be slowing things down? Also, remember that some of the most memorable and enduring pieces of communication are surprisingly short. The Lord’s Prayer has a mere 71 words; The Ten Commandments extend to just 297 words; and the Gettysburg Address was all wrapped up in 271.