So the Monty Python crew are back on stage for one last huge hurrah, designed to sort out a variety of needs including pension pots, alimony payments and legacies for young wives. And it reminds me of an incident that brought a communication conundrum into sharp focus: when you meet a famous person in a domestic situation, do you talk about what made them famous?

My general rule of thumb is that, once you have shown initial acknowledgement and appreciation, you talk about anything but what made them famous. I put this into practice one evening in the early-80s, when I went straight down to the pub, finding just two people there: the landlord and Rick Parfitt from Status Quo. As soon as he had served my drink, the landlord disappeared, leaving just Rick and myself. It really didn’t feel right to start discussing the joys of his band’s 1973 gig at the Guildford Civic Hall, so we talked about how to cook oven chips, the price of petrol and who might have borrowed his hedge clippers. At the time, this man was considered to be a bit of a hellraiser!

I learned the lesson in a rather painful way, however, one night as I sat down for dinner two places away from Monty Python’s Terry Jones. At the time Terry lived immediately next door to some mutual friends who had a lot of parties, so I saw him on a fairly regular basis. We therefore exchanged ‘catch up pleasantries’, as he told me about a Radio 4 series he was working on and I touched on my new training programme. He even asked about a special magic convention he knew I been attending. Almost as an aside, I added: “Oh, by the way, congratulations on winning the poll” and he responded with slightly embarrassed gratitude. 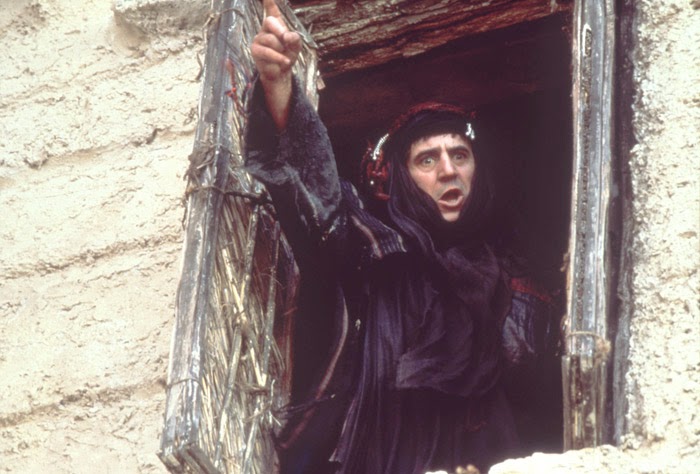 “What’s that?”, asked the woman sitting between us. I explained that there had been a lot of press coverage during the week about a survey conducted to find the funniest-ever line in a film – and Terry came top. “So what was the line”, probed the woman. Trying to move the conversation on, I said that it was the ‘famous one from The Life of Brian’. “But which one?” she persisted. I looked at Terry and he shot back a pretty clear ‘you’re not getting Python’s greatest hits tonight’-expression. “Well”, I replied, “it’s the one where he says: ‘He’s not the Messiah; he’s a very naughty boy’ ”.

I had just performed the funniest-line-ever in a movie. In front of its originator. We reverted to domestic trivia as quickly as possible.

Posted by Nick Fitzherbert at 08:23