‘Little elephants’ in the room can hijack your message – as Phil Collins can testify!

This week I am urging business presenters to watch out for ‘Little Elephants in the room’ when they deliver a presentation. Yes, following the ‘Starbucks Test’ that I described in my last blogpost, I have coined another phrase. More accurately perhaps, I have adapted a very well known phrase that goes back hundreds of years but has come into increasingly frequent use in the past decade as people describe awkward scenarios where a big issue remains unaddressed.

I believe, however, that with business presentations there can often be ‘Little Elephants’ in the room – in the form small details that will inevitably be at the front of the minds of those you are addressing. A Little Elephant starts as a distraction and if left unattended can end up as the framework for everything you are seeking to communicate. If, for instance, I were to turn up for a presentation with a black eye, then whatever I say, the main thing audience members are going to be thinking is: ‘I wonder how he got that black eye’? They may start using some of the things I say as pointers to solutions; those at the back could even be getting into a whispered dialogue about it.

What I would need to do, therefore, is to address the black eye right up front, quickly and definitively: “Hello I’m Nick Fitzherbert – as you can see I’ve got a black eye – that kitchen cupboard clearly wanted to get its own back when I finally prised it open! What I am going to talk about today is…”. By acknowledging your situation clearly but concisely you have the best chance of clearing it out of the way, so that you can move on and have your audience focus on what you are actually saying rather than the causes of your ‘shiner’.

Two examples from the world of show business demonstrate how this tactic can be deployed. Rob Beckett is a young comedian whose opening line when he was initially establishing himself was: “Hello, my name’s Rob Beckett and I’ve got massive teeth. A funny thing happened the other day…” By having an overt laugh at himself right up front and moving on swiftly the Little Elephant has left the room the audience can now focus on his comedy rather than his prominent gnashers. David Regal is one of the most creative people in the magic world and he happens to be rather short. None of us really noticed this until he appeared on 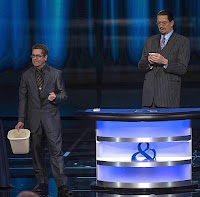 Penn & Teller’s Fool Us TV show, performing alongside the extremely tall Penn Jillette.  As they came together centre-stage Regal’s line was: “Thank you for joining me Penn”, then, turning to the audience: “as you can see, pinstripe (the pattern of Jillette’s suit) gives the illusion of height.” Again, the Little Elephant had left the room and now all we were thinking about was Regal’s magic.

Finally, if you remain in any doubt about the ability of a Little Elephant to steal attention and frame your communication, my black eye example happened for real just last week. Phil Collins announced a series of new shows. This was big news as he was coming out of retirement after a series of health scares and personal problems. So the story made page 3 of London’s Evening Standard. The front page, however, was dominated by a picture of Collins captioned ‘How did rock star Phil Collins get that black eye’? As for framing what he actually wanted to communicate, the Page 3 story was headed: ‘Collins soldiers on after bathroom fall to announce: I’m coming out of retirement’.

It has to be said that, on this occasion, Collins’ PR team were probably raising a glass to that bathroom floor, but Little Elephants are rarely going to be quite so helpful!

NEWS UPDATE: Robert Peston presented Peston on Sunday yesterday with facial injuries – but not before he had inserted a jokey preview clip in which he explained that he had fallen off his bike! 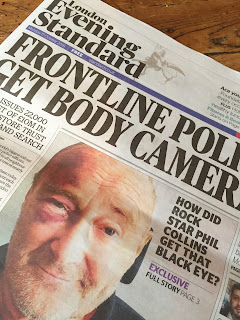 Posted by Nick Fitzherbert at 07:58